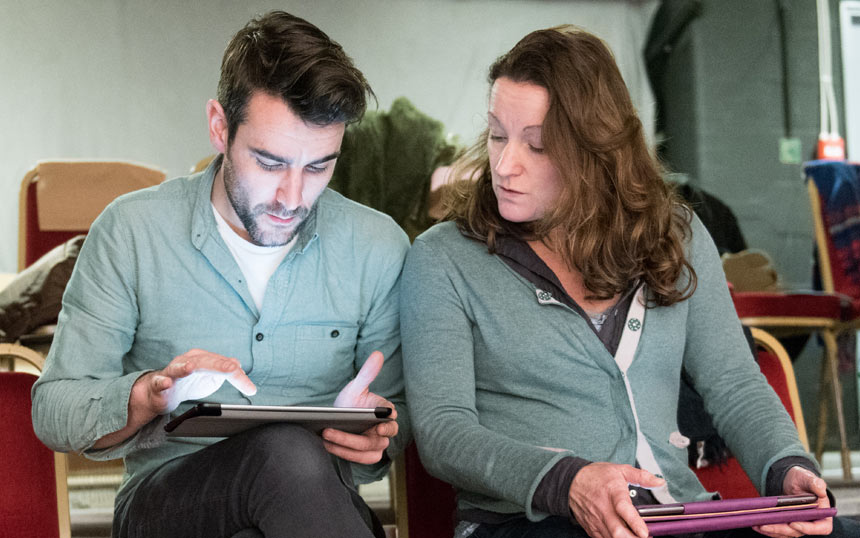 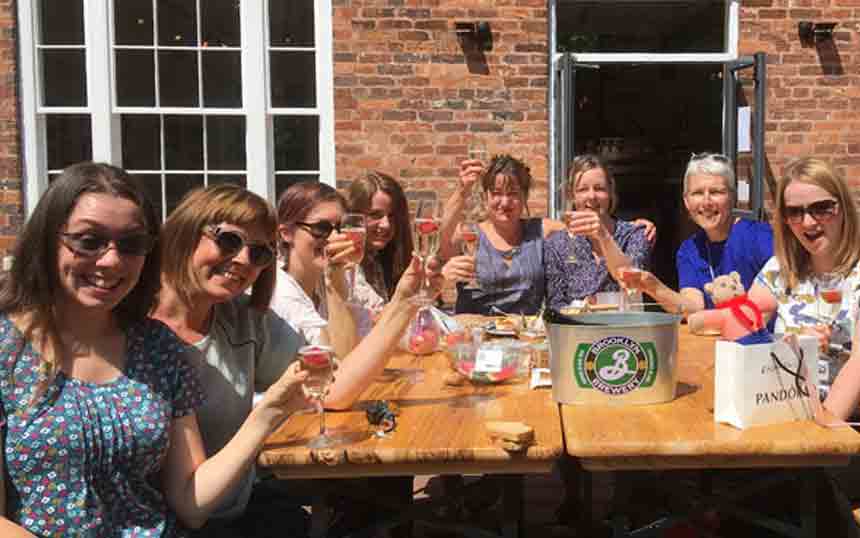 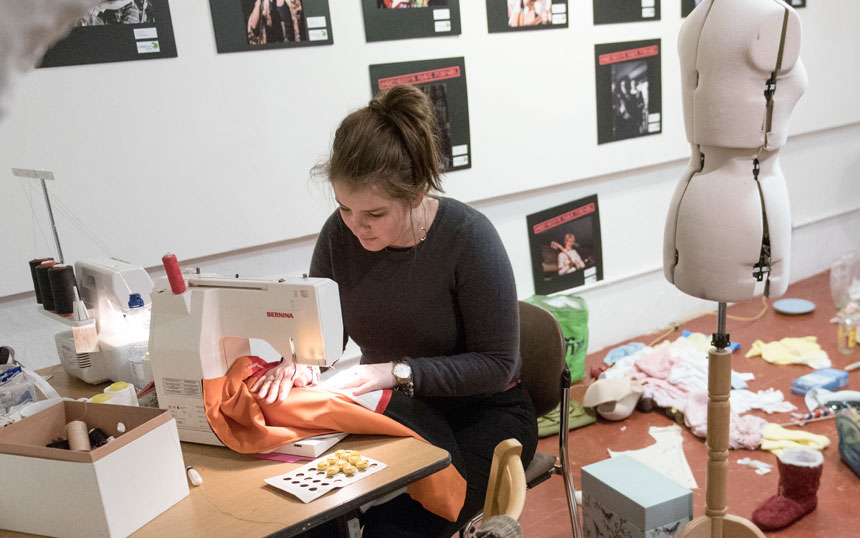 Administrator: Sarah Hawkins
Sarah made her first professional appearance with Vamos Theatre in Nursing Lives (2010), having trained in Vamos Young People’s Theatre for 3 years. Since then she has performed in Offal Tales (2012), three tours of Finding Joy (2013, 14 and 2016), Sharing Joy (2014, 2015 and 2017), Nursing Lives (2015) and The Best Thing (2015). The call of home comforts led to stage management roles, while the arrival of baby no.1 now sees Sarah working as Administrator. When she’s not at her desk, Sarah is also a trained horticulturalist and loves nothing better than working in the garden.

Administrator: Rhiannon Malbas
Rhiannon started her career in the Civil Service, working as a Diary Manager to a succession of senior government ministers. She then moved into the charity sector, working as an Executive Assistant at Battersea Dogs and Cats Home and Birmingham Children's Hospital. After a long stint in London, she decided home was calling and moved back to Worcester to start a family. In her spare time Rhiannon runs around after her two young children, enjoys cooking, walking and works as a freelance bridal florist.

Creative Producer/Youth Theatre Director: Honor Hoskins
Honor joined Vamos Theatre in 2007 and has worked as part of the Core Team for the past ten years as a performer, practitioner, tour manager and Marketing and Development Manager, as well as delivering a large part of the company’s Learning and Participation programme. Prior to joining Vamos Theatre, Honor worked for The Roses Theatre, Tewkesbury as Outreach Officer. She has also delivered and managed projects with The Everyman Theatre, Cheltenham; Snap Children’s Theatre Company; and three County Youth Offending Services; she also trained with TiPP (Theatre in Prison and Probation).

Executive Producer: Claire Morton
New to the Vamos Theatre team in 2018, Claire has over 13 years of extensive experience and knowledge of working across performing art-forms and the cultural sector. Between 2015-2018, Claire worked independently for a range of projects, from independent artists to international touring companies (including Ballet Black, Stuff and Nonsense Theatre Company, Made by Katie Green and many more), fundraising just under £500k to support the delivery of work and new artistic programmes. Prior to this, she co-directed Morton Bates Arts Services, helping to raise over £1.3m through Arts Council England, securing over 750 performance bookings and delivering 100 projects across the portfolio between 2008-2014. Claire holds a BA in Dance & Culture with Professional Training (University of Surrey), a Masters Degree in Arts Management (City University, London) (Arts Humanities Research Council Award recipient) and is a fellow of the Clore Leadership Programme (short course).

Head of Communications/Associate Artist (Composer): Janie Armour
Janie has been part of the team since its beginnings in 2006, composing the music for all of Vamos Theatre's shows. In 2014 she also took on the role of Head of Communications, where her responsibilities include overseeing the company brand, press releases, copy and website.

Health Connector: Hazel Ratcliffe
Hazel is the director and founder of Ratcliffe Training Consultancy and has worked in Social and Health Care for over thirty years. As a qualified nurse, psychotherapist and social worker, she has worked with most client groups, but more intensively with people living with dementia, those with learning disabilities and in mental health. Hazel has been an Associate Specialist in Learning and Development for the Association for Dementia Studies since 2010 at Worcester University. She is a Dementia Champion and has worked closely with communities over the past five years building awareness and reducing stigma around memory loss.  She also co - founded ‘Buddies’, a support group for people living with dementia, run by people living with dementia.

Marketing Officer: Abbie Payton
Abbie started her career in travel and went to many lovely places around the world, after which she studied at Chichester University and graduated with a 2:1 degree in contemporary dance and business studies. After leaving university, she worked in marketing for an outdoor activity centre in Birmingham for 11 years, alongside teaching dance classes and workshops to children. She currently teaches wedding couples' first dances in her spare time.

Associate Artists:
Carl Davies: Associate Artist (Set and Costume Designer)
Carl first worked for Vamos on the first tour of Finding Joy in 2013. He trained at the Royal Welsh College of Music and Drama, and was a finalist in the prestigious Linbury Biennial Prize for Stage Design 2005. He has worked in a huge variety of performance genres including opera, panto, Shakespeare, site-specific performance, and circus; and with companies as diverse as Forest Forge, Hijinx, NOFITSTATE, and Theatre Royal, Plymouth.

James Greaves: Associate Artist (Performer)
James co-founded Trading Faces Theatre Company in 1987, specialising in physical theatre and mask work, and from 1989 worked extensively with Trestle Theatre Company taking mask performance all over the world, from Tashkent to Sydney and Tokyo to Taunton. He performed in many Trestle classics, including Top Storey, State of Bewilderment, Blood and Roses, Adventures of the Stoneheads and Beggars Belief. James first joined Vamos Theatre to perform in Finding Joy, taking on the role of Danny. Since then he’s toured throughout the UK and Europe with us, as well as leading mask workshops across the UK.

Alan Riley: Associate Artist (Performer/Director)
Alan is a performing arts graduate of Middlesex University, who has worked as a performer and director with Vamos since 2014. As a founder member of Trestle Theatre Company, he has acquired extensive devising and performance experience in mask theatre. He also co-founded ‘Theatre de Camping’ producing and touring several physical theatre comedies. Alan was employed as a performer and writer for The Tweenies, a pre-school children’s programme for BBC TV. He contributed a number of scripts and provided the ‘body’ of several characters, mainly Doodles the big red dog, but also: a sprightly old lady, a clown puppet, a robotic spaceman toy and a musical monkey that played the drums!

Board of CIO trustees

Michael Addison
Michael is currently Head of Operations at ecobirmingham, a charity dedicated to encouraging sustainable living. He has a history of managing and performing with arts organisations including Figment Theatre (an educational theatre company), Faulty Optic (puppetry), Tell Tale Hearts Theatre and Compagnie Animotion (France). Michael came across the work of Vamos Theatre whilst working as a relationship manager for Arts Council England and was struck by the impact, uniqueness and power of the company’s work. He is looking forward to supporting us grow and respond to the environmental challenges and demands of international touring ahead.

Claire Birch
Claire has over 15 years' experience as a theatre producer working across small to large scale and across the UK. She is currently a Producer for the Birmingham 2022 Commonwealth Games Cultural Programme.  Prior to this she was a Producer for the Royal Shakespeare Company (RSC) delivering work across all three houses and on tour. This includes the flagship production A Midsummer Night’s Dream a Play for the Nation in 2016. She reopened The Other Place and produced each season of radical new work there. She led on artist development and R&D. Prior to the RSC, she was Associate Producer at English Touring Theatre and a freelance producer. She has worked for the Rifco, Royal Court Theatre, Jackson’s Lane and The Albany, Deptford.

Penny Mayes (Chair): www.dramatic-solutions.co.uk
During a 20-year tenure at Trestle Theatre Company as General Manager, Penny’s management, production and entrepreneur skills played a major role in establishing Trestle as one of Britain’s leading theatre companies with substantial touring throughout the UK and overseas. Penny established her company Dramatic Solutions in 2002 on completion of a £2 million building project she instigated and managed: Trestle Arts Base in St Albans.Beyond Trestle, Penny has undertaken a number of varied and diverse projects. Company Management includes Apples and Snakes, Brook Street Band and Clod Ensemble - achieving Arts Council NPO status plus substantial fundraising to include a half a million pound association with Guy’s and St Thomas Charity. Project Manager originating a rural touring scheme Alive & Reel and Freeword, the first home for literature, literary and free expression in Farringdon Road, London. Producer for several companies to include Helen Chadwick Song Theatre, David Glass Ensemble and Urban Expansions;. Fundraiser for artsdepot where she secured a Downing Street reception and HRH Prince Edward to open the venue. She regularly assists performing arts companies in all aspects of performance arts management and company development, most recently Oily Cart. She is currently producing Lucy Stevens and The Penelope Project and is a regular teacher on the MA and BA Arts Policy courses at Goldsmiths University. She has had a long and happy association with Vamos Theatre as Creative Producer.

John Plant
In 1981, John completed a degree in Theatre Studies and English. He then spent eighteen years  travelling the length and breadth of the country working with performance arts organisations and touring theatre companies in every conceivable community context. His roles included performing, writing, directing, managing, designing, fire breathing, stilt walking and driving the bus. During this time he founded MAD – a theatre in education company whose aim was to work anywhere except in theatres. He also wrote for stage and radio and went back to education in 1994 to complete a Masters Degree in English and Creative Writing.  In 1996, he completed a PGCE and took up post as a drama teacher in a school in Tyne & Wear. He stayed in education for the next twenty-five years, working in schools in Scotland and the north and south of England, taking up various roles including Head of Drama, Head of Performing Arts and Assistant Head Teacher.  Throughout his teaching career he passionately promoted arts in education with an unswerving belief in freedom of expression for young people. Part of this was to develop a long standing relationship with Vamos Theatre which has continued into retirement and beyond!

Michael Sheath
Michael worked as a probation officer for ten years before joining The Lucy Faithfull Foundation. LFF is a charity which seeks to prevent child sexual abuse by working with offenders and their families. The Foundation runs a confidential helpline, Stop it Now!, for individuals concerned about their own or another's sexual thoughts and behaviours. Michael delivers training to police officers, social workers and health workers in relation to understanding sexual offending, and to schools and colleges in relation to Safer Recruitment practices. He has a special interest in men who view child abuse material, and works as a staff trainer for Europol.