Thanks to the Château de Praisnaud for stunning Dead Good location 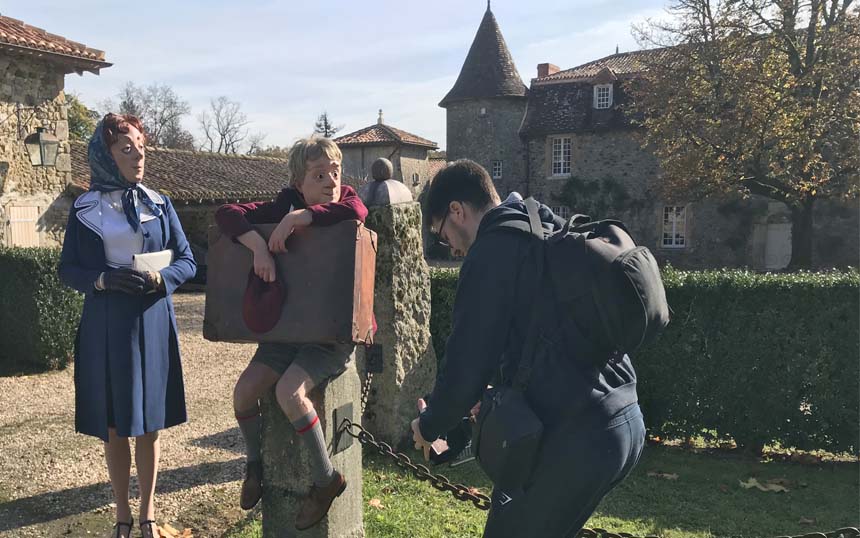 A huge Vamos Theatre thank you to Hugues de Boissieu, owner of the beautiful Château de Praisnaud in France, for allowing us to recently shoot a new scene for our theatre production, Dead Good, at the castle. The new scene, which like several others in the show is presented on film, centres around our character Bernard’s childhood. Vamos Theatre composer Janie Armour had offered a piece of French music to accompany the original scene, so immediately we made Bernard's backstory to be that he was half-French with an almost aristocratic  background. That's what sent director, Rachael Savage, on the search for a French chateau and within a couple of weeks she'd started a polite, jovial relationship on email (supported by Google Translate) with the charming Hugues.

The chateau is a haven of peace at the heart of a triangle formed by the cities of Angoulême, Poitiers and Limoges. It was built in the 16th century and includes a corps de logis and two conical-roofed towers on an estate of around 100 hectares of woodland and meadows. This unspoilt site is situated in Charente Limousine, between the Atlantic coast and the Limousin, with its green valleys, woodlands and rivers. It is stunning, but it's owner, Hugues de Boissieu is the most kind, gentle, warm and engaging man you could ever dream to meet.

The film, featuring actors James Greaves and Alan Riley, and filmed by Daniel Hill, made the most of the beautiful setting to tell the story of Bernard’s unhappy childhood. To see more, book tickets to see the show!

The Château de Praisnaud has rooms open all year round to stay in. Once you have seen the show and this idyllically shot film, you might just be tempted to visit! For more information about the chateau, visit https://chateaudepraisnaud.fr/