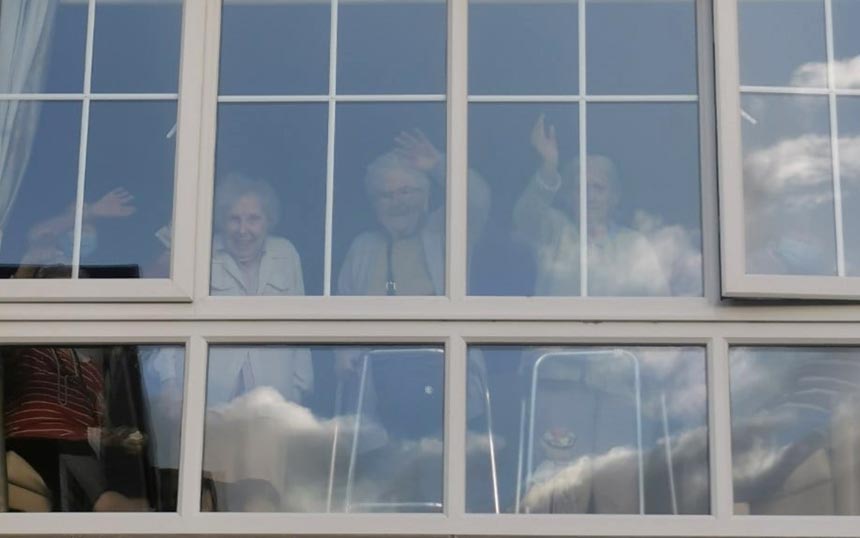 Thank you to everyone in the UK and beyond who have supported The Wednesday Wave over the last ten weeks. Our campaign to combat loneliness, encouraging everyone to wave and make connections throughout our communities, began with one person waving to a care home resident through a window, and spread to involve thousands of people from all walks of life.

Whilst everyone who’s taken part and spread the word has made a huge difference in these difficult times, we’d like to give a shout out to some particularly special contributors:

Roy Sager
Roy heard about The Wednesday Wave through ‘Buddies’, a dementia meet that he attended every week in Leamington Spa at a local pub. Since lockdown the group have been meeting via Zoom and everyone including Roy were keen to support the initiative as they were acutely aware of feeling lonely and isolated sometimes. Over the weeks, with further help from family, friends and neighbours, Roy has created his own bench to wave from, updated with The Wednesday Wave signs, lights and even a Christmas tree.

Runwood Homes
Runwood, a family-led, residential, dementia and nursing care provider with over 74 homes and day centres in the UK, encouraged all their care homes to take part, and take part they did – in style! A special shout out to Paul Gaskell, Director of Wellbeing Dementia Services, who's been amazing.

Blue Coat School, Coventry
Blue Coat's brilliant students joined in with real enthusiasm, after Chaplain Lou Peet heard about the initiative. Year 7-11 students coloured in posters to give out, and created hand artwork, writing on them the names of people they committed to look out for. The schools also created a fantastic film of class waves for social media (made by Julie) - thanks for letting us include you in our trailer!

Stanfield Nursing Home
Supporters from the start, Stanfield patiently let us invite BBC and ITV to film the TWW's launch outside their home, as well as joining in enthusiastically every week. Thanks everyone!

Brookside Care Home, Preston
Just one of the many care homes that took part in The Wednesday Wave, Brookside supported the wave in style, creating giant hand artwork and short films, as well as encouraging the local community to get involved (including staff at Dunelm!). They were the worthy winners of our TWW creativity competition.

Radio Leyland
Radio Leyland is a volunteer-run Community radio station that plays a big role in connecting the local community. Since finding out about The Wednesday Wave, volunteers from the station have been waving every Wednesday at care homes throughout the district, covering around eleven different towns and villages over the weeks.

Newent Community School and Sixth Form
Newent have been waving since day one, and have produced the most amazing and joyful waving pics and films. Every single young person and teacher who’s taken part has made a fantastic difference to fighting loneliness. Well done all of you!

The Wednesday Wave has been a people-led campaign, with supporters creating a real buzz through word of mouth and getting out there to wave come rain or shine. Some people have pledged to continue to wave until residents can once again can see loved ones and connect with the world on a regular basis…so let’s celebrate every wave so far, making someone’s day a little brighter.