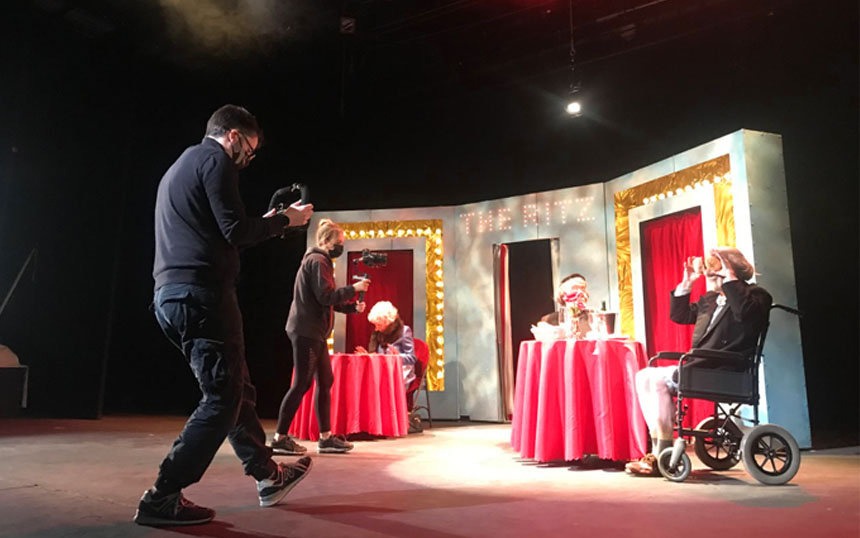 Why make a theatre show into a filmed version? Why bother? Mask purists would say that full mask doesn’t work on film, it’s made for live theatre after all.  During the pandemic, because of our BBC commission, we had over 100,000 people watching our work rather than the annual 5-7,000 in theatres. When we made a documentary about our work for London International Mime Festival, it was seen all over the world from Munich to Puerto Rico. Due to the pandemic, 25% of our 2021 tour was cancelled, and since then some of these venues (with loyal Vamos followers) have closed down - so audiences didn’t get the chance to see the much awaited Dead Good. Add this to the fact that students are not taken to the theatre so much anymore and instead are shown filmed versions of plays, and that companies like The National Theatre and Frantic Assembly can offer online versions of productions made in a way we can only dream of…maybe it’s time for a new way of thinking and some experimentation. These are the reasons that we have worked tirelessly to make a filmed version of Dead Good;  a film to share more widely (we haven’t even mentioned Brexit and the limitations on touring internationally) and it’s totally free so that it can been shared more generously.

I’m lucky enough to be working with film makers and editors Daniel Hill and Lily Coull, who are theatre makers in their only right and very clever and sensitive film makers. But film and full mask really are worlds apart - completely different genres - so creative choices and compromises have had to be made.

We have learned so much in the excrutiatingly painful editing process - Dan has been editing for weeks. He sees things that Rachael doesn’t see and visa versa. Dan sees shadows of the camera on the set and watches continuity like a hawk, whilst Rachael just focuses on the story that the masks are telling and how the audience will engage with and interpret what they see. Dan whizzes round the editing suite with such speed and dexterity, that it makes Rachael feel sick just trying to get her head around the technical enormity of it all. He uses so many brilliant techniques -  from making still camera shots move, to artificially closing in on the action as characters become more vulnerable; it's incredible to watch him work.

Continuity is a nightmare. Lily and Dan shot the show on six different cameras during three different shows. Having options is joyful, but the continuity of different shows means that cutting between shots is very tricky. And there are six options to choose from! Angles from different shots change the meaning. Some shots of the masks don’t work when too close. The edit of camera shots needs to match the pace of the action, so sometimes the edits come thick and fast to add to the energy of a scene and at other times it becomes too intrusive as too many changes lose the connection with the mask and the mask requires stillness. Mask is about actions and reactions, and if you change the camera shot mid-action, you miss the story. There are choices to be made of when to go in close and when to expand - when to stay still on one camera angle and when to go mad with edits. Or even when to completely change and cut moments that didn’t ring true.

It’s all a fine balance.

Find out more about the Dead Good online premiere.