An explosion of fun through 3 millimetres of safety glass 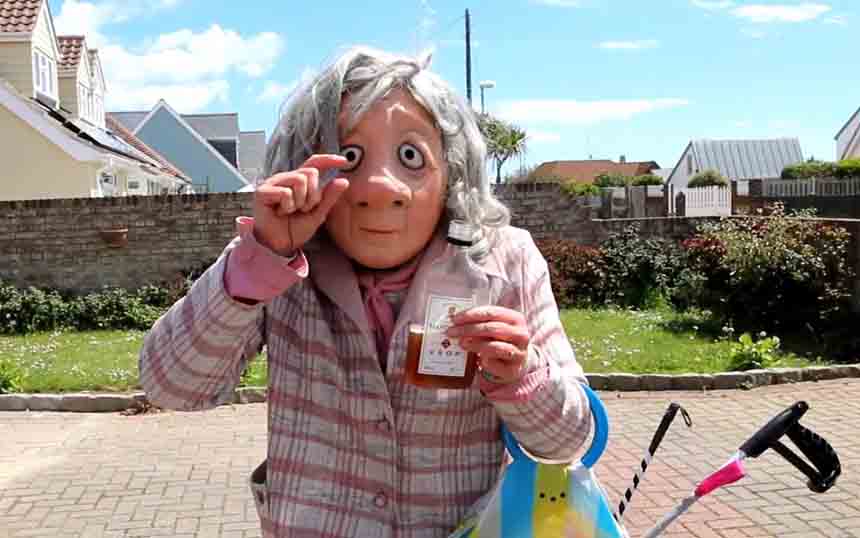 Our Mission states boldly, "we aim to transform lives through the empathy and connection of full mask theatre." Our Vision starts with, "We believe that full mask theatre taps directly into the power of empathy and encourages awareness of our shared human experiences in an increasingly isolating world". Love Through Double Glazing has been one of the truest projects to our core beliefs; it's been one of the most important shows I've made in my entire career. This has been because of its fundamental need and relevance during a pandemic to the most cruelly-treated human beings in our society - and that's the staff in care homes as well as residents (and they are the ones lucky enough to have survived this last 18 months). Love Through Double Glazing is more than a show, it is topped and tailed with love, engagement, care, laughter and sometimes tears. It is an explosion of fun through 3 millimetres of safety glass - where the communication goes beyond words, listening with our eyes, responding with cheek, chaos, naughtiest and empathy. “It was real entertainment, wish we saw more nowadays,” said Pat, 91.

The show is so wildly shocking (beginning with an elderly lady, Flo, walking through the home's garden, swigging from a brandy bottle) shortly followed by the first visitor, Geoff the fitness instructor, doing a striptease to Elvis. "It's wrong on so many levels," Sean would shout to the stunned faces as Flo pushed him to the floor and tried to rip down his pants. And unbelieving faces would glance at each other around their imprisoned room of shielding, and start to chuckle.  And then the laughter grew as the story became more wild, Flo adding her weekly pills to the chef's cake mixture as retaliation for him moments early threatening to cut up the fluffy white dog (that she'd rather remissly left on his chopping board).  Throughout the story, Flo builds allies in the audience, who start to shout out, "slap him, push him, get his clothes off." Nigel, 85, said “I enjoyed the flirting,” and Daphne, 90, agreed, she “loved all the naughty bits." The show has no boundaries for mischief and within two hours of our arrival a change has occurred. On arrival, both staff and residents looked empty in their bodies and broken. On leaving, they look shaken awake, through plotting and moving, singing and gasping, laughing and loving once again. “It made me feel alive again,” said Beattie, 101 years old.

During our visit, we have three playlists - a gentle, loving preshow; an eclectic theatrical show list; followed by an hour of celebratory music. There are some memories that we will never forget, I'll share just a few from our 22 care home visits. After the show, all the staff (and even the caretaker) at Bromson Hill in Warwickshire joined us outside and danced in the rain - they laughed, whooped and danced for the residents, but more importantly they danced for themselves. “You captured the heart of everyone here. To see everyone laughing was priceless, it meant the world to us,” said one overwhelmed carer.

"We’re old but we’re not stupid," was the greeting of one gentleman, as both Sean and I made a fast switch between talking overly-kindly to someone living in late stage dementia to cutting every single ounce of what could be taken as a patronising tone. I felt so privileged to have a moving conversation with Queenie, whose body was trapped in a home and wheelchair (let's say both could do with some improvement) whereas her mind was racing after the show with the extraordinary comparisons of the war and the pandemic. As a child evacuee she was sent away to Wales, missing her mother desperately, and towards the end of her life, again, she was starved of the love of her daughters.

Another special memory is a show where we were performing to one bubble of residents in a room, separated from the room of Rose. Before the show, I had been drawing on her window, kisses and hearts, which she responded through actions and she loved meeting Norah the performing dog. I didn't want to leave her alone; I felt bad for taking away Norah. So I asked Joseph (my 18 year old boy, who's stage managed the tour and my brain, in our own touring bubble) to come and draw for her. He's shy and about to go to Uni to study illustration; to Rose's delight, he drew for her her very own life-sized dog on the window pain, a priceless picture of human connection.

In another home that had suffered so many deaths to Covid, one resident was immediately glued to me, calling out and looking painfully upset. A staff member explained that I had a striking resemblance to her daughter. That explained it when she started calling out, looking me deep in the eyes with tears streaming down, “I miss you Julia, I miss you.” "I miss you too, mum," was the only way I could respond over and over again. That day brought home precisely how desperate a year it has been for separated loved ones.

Similarly, a wife brought a bag of clothes to one garden, telling me, "I need to drop something off for my husband, Derek, but I don’t want him to see me because it upsets him,"  I was able to tell her, "He has been such good fun, we have had great banter. He’s been so cheeky this morning.” I'll never forget that elderly lady who filled up with tears, saying, "I’m so pleased, that’s such a relief for me" as she drove away in her car.

We took a risk by touring the show to The Star National College, a college for young adults with complex needs and profound disabilities. I've collaborated with them for over 20 years, with such mutual respect.  It was so hard knowing how to greet staff and friends from the college (now top to toe in PPE) who I'd usually cuddle in greeting; instead we rubbed bottom to bottom, like kinky Eskimos! I say it was a risk, as we were worried that the show was inappropriate, not relevant, with playlists from wrong decades. It was a risk worth taking; they shouted more loudly and whooped endlessly, whipping Sean up into more outrageous behaviour as he performed part of the striptease from the top of their shed roof. An unforgettable moment was when Elliot, a young man with profound additional needs who “doesn’t usually engage” blew a kiss back at Flo when she wrote his name (backwards of course) in a love heart on the window. The window is a barrier, but you can get so close on many levels.

So the brilliant, outrageous, beautifully kind and playful Sean Kempton, my son Joseph (now expert clothes washer and organiser of two fools and a dog) and my over-cuddled and excited Norah, as well as my own weary bones are all four hanging up our tights for a while; knowing that if there is only one thing that  we have managed to achieve in this hideous year, it's been to wake people up, with love through double glazing, in these hidden away, locked-down homes, and to bring back permission to laugh again; our job here is done.

You can also read Norah the dog's blog, Stealing the Show - and the Biscuits, right nere.